For my second foray into Winter 2010 Restaurant Week, I really wanted to go somewhere I’d never been but had always wanted to try. Rasika was booked (damn you, Rasika, and your awesome popularity!), but I managed to find a table for four at a decent time at Café Atlantico. This Latin-themed restaurant is one of the many excellent offerings that innovative Spanish food weirdo Jose Andres has given Washington DC. It’s also the home of Minibar, a six-seat tasting “room” where the Andres team showcases their mad molecular gastronomy skillz (yo). Minibar is next to impossible to get into, and it’s wicked expensive, but I was happy enough to be going to its host restaurant.

I got off the Metro on this cold, blustery Wednesday night and made my way to where I thought the restaurant was supposed to be. However, Café Atlantico is on one of those weird Brigadoon streets that DC has so many of—streets that don’t appear where they’re supposed to, change in the middle of an intersection, disappear entirely—so I got a little turned around. Fortunately, I was early, so no big, but unfortunately, I was in some kickass heels, so that was a little more walking than I’d wanted to do. Anyway, I finally found it and the place was buzzing, but after the hostess took my coat I managed to snag a barstool so I could have a cocktail and wait for the rest of the gang.

As mentioned above, Jose Andres is known for his crazy experimenting with food, and this goes for cocktails as well. The bar features something called the “Magic Mojito,” and it is by far one of the cooler things I’ve ever seen. The mixologist (so much more than just a bartender) sticks a big wad of cotton candy in an up glass, mixes the mojito concoction, and then pours it over the cotton candy, causing it to disappear in an instant. So cool. And not overly sweet, surprisingly. Gary ordered one of these when he got there. I had a pisco sour, which was yummy and strong, and Sister Terrifyah had a caipirinha. She’s crazy like that. 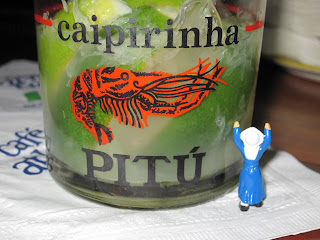 Heather and Roland arrived (poor Ali was sick with a particularly tenacious cold), and as the place had gotten very busy since I first checked in with the hostess, there was a bit of a wait for our table. No big deal, though—gave us time another cocktail at the bar! After about 20 minutes the hostess came and got us and led us to our table on the top floor of the restaurant—and we could look directly into Minibar! That’s about as close as I’m going to get any time soon, so it was pretty cool.

Our very friendly waiter, Bob (that wasn’t his name, but I don’t remember what it was) showed up to give us the RW menu, which was pretty short—just four starters, four entrees, and two desserts to choose from. That was a little disappointing, but what was on there looked pretty friggin’ good, so we got over it.

Gary ordered the celery root soup, which prompted a discussion about the difference between celery root and celeriac. (Turns out they’re the same thing. We learned!). The presentation was a nearly empty bowl with a dollop of yogurt sprinkled with a tiny bit of caviar, into which Bob then poured the creamy soup. Gary made many yummy sounds. Heather and Roland both ordered the tuna ceviche with coconut milk and avocado and made them disappear (more magic!). I got the Dominican conch fritters. I had had fried conch in a bar in Ft. Lauderdale which were awesome, but these were so much awesomer. Inside the lightly fried coating was a piece of the shellfish, and somehow some kind of chowder/gravy liquid. How you fry liquid, I don’t know, but it was amazing. They came with what looked like little steamed dumplings, but the “skin” was actually made from jicama and the filling was crazy creamy avocado goo. 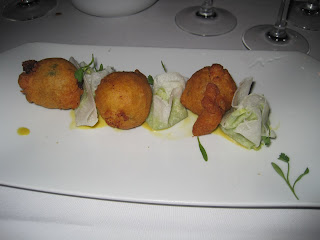 Oh, I forgot—we started the whole thing off with guacamole that was made fresh at our table. Other places do this as well, but this was so much better. Rosa Mexicano can go straight to hell.

For entrées, we were all leaning towards meat. I was vacillating between the duck and the flatiron steak, but in the end the beef won out. You guys. It was CRAZY good. The meat sat on a fluffy pile of potato “espuma”—basically really whipped potato puree—and was accompanied by haricots verte with sautéed mushrooms, garlic, and plenty of butter, I’m here to tell you. The meat was cooked beautifully, with just enough char from the grill. Gary and Heather also got the steak, while Roland went for the duck confit with Brussels sprouts, apples, and raisins. Yumblies.

The dessert choices were warm chocolate cake or sorbet. The hell? We all ordered the cake, because we are not insane. (In fact, Bob told us that he had served something like 94 tables, and only 12 or so ordered the sorbet for dessert.) Don’t get me wrong—I love a sorbet, but not when the words “warm” and “chocolate” are on the menu, and especially since I had shortchanged myself at Kellari Taverna.

Check this business out: 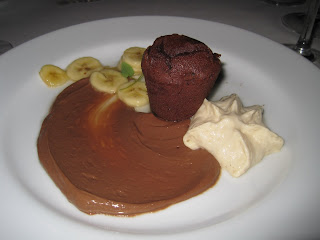 That island of chocolate cake, sitting the middle of a chocolate mousse sea, was actually a volcano with flowing chocolate lava inside. Uh muh gah. The banana goo I did not care for, but the rest was incredible, and very nearly killed me.

It was a great evening, for which I was very glad. Our waiter was friendly and attentive without being obnoxious or hovery, and was happy to explain what the Minibar guy was doing when he came up to get some dry ice. The food was just lovely, even though the choices were few. And the company, of course, was terrific.

Wines (chosen by Roland, who I will always defer to):
Alcena Monastrell 2007, a Spanish Jumilla aged in oak
Crios Cabernet Sauvignon from Mendoza, Argentina

I’m looking forward to going back to Café Atlantico, especially for their Latin “dim sum” brunch. I’ll let you know.

I had never heard of this place when Gary e-mailed to say he’d booked a table for our usual RW group, but I like Greek food and don’t get a chance to have it often, so was looking forward to it. The space where the restaurant resides has notoriously been a dead zone for eateries, so it would be nice to see something succeed there.

After running into each other on the Metro, Gary and I battled the freezing wind and made it to the restaurant to meet Heather at the bar and wait for Ali. The restaurant and bar were very inviting on such a cold night—dark wood and sizable wine glasses at the bar, and warm ivory and blond wood in the dining room. The bar was pretty crowded, but we managed to snag barstools and settled in with some wine. They are very generous at Kellari Taverna’s bar (a trend that would continue in the dining room—more on that in a bit). In addition to the deep wine glasses, there is also a massive bowl of different kinds of olives and a large platter with a big hunk of cheese and piles of crunchy bread for snacking on—gratis. Not your average bar snacks, that’s for sure.

Ali having arrived, we settled our bar tab and headed to our table. The hostess handed us our reading material—in addition to the Restaurant Week menu, you could also order off the regular menu, which is pretty sizable, and there was also a HUGE wine list. Our young waitress, the adorable Alexandra, came by to explain how things work. Kellari is primarily a seafood restaurant, and one of their specials is fish by the pound. Sitting on a mound of shaved ice on one side of the restaurant is a variety of types of fish, which customers are invited to inspect before choosing what they want. That seemed too complicated for us, though, so we just stuck with the RW menu.

All right, so appetizers: Ali and I ordered the grilled octopus, Gary got sardines, and Heather got spanakopita, which is a classic Greek snack of phyllo dough with spinach and feta cheese. The octopus was charcoal-grilled and came with a little salad of fennel and leeks and capers. Gary’s sardines were grilled with olive oil and lemon, and he declared them delicious, if bony. The octopus was very good, but man, I am here to tell you that that was not an appetizer portion. I don’t think I got even a quarter of the way through it before I started getting full, and we still had two courses to go! I felt bad letting Alexandra take my uneaten portion away, but octopus is not something you can take home and reheat the next day. Unless you are trying to resole your sneakers or something. 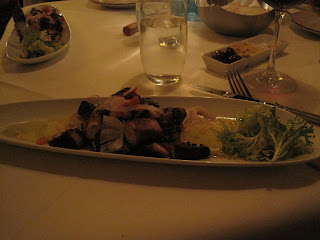 Wine with apps, recommended by the manager/wine guy: Kir-Yianni Paranaga, a dry-ish blend of red varietals from Greece that I cannot pronounce. Very good.

When it came to entrees, I wanted the paidakia (lamb chops), but I was a little reluctant to order something that wasn’t seafood, since that’s the restaurant’s specialty. But then I remembered that this was also a Greek restaurant, and Greeks know their lamb, that’s for damn sure. Ali ordered the scallops with squid ink pasta, Heather got the tomato-braised Chilean sea bass, and Gary got the Arctic char. Everything was really good, but once again—HUGE portions. My plate held four lamb chops, which was about two more than I needed, and they were Flintstone-sized. I got through two and a half, and the rest of the gang helped out with the rest. Ali’s scallops, while cooked beautifully, were each the size of a baby’s fist, I swear. And not a preemie, either. I’m talking a regular baby. Big. Flavors were great, though—the lamb was exactly what I was hoping for from a Greek kitchen. 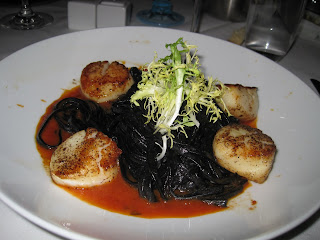 Wine with dinner, also chosen by wine guy, who gave it to us for a cheaper price because he rules: Angelo Iatridis Axia, a 50-50 Syrah/Xinomarvo (I don’t know) blend. Less dry than the previous one, and a very nice wine.
I had maybe a micron of space left for dessert, but I was looking forward to at least trying the Greek yogurt with sour cherries and walnuts. I probably shouldn’t have been. The yogurt was fine, but the cherries were more like pie filling. Certainly was no match for the chocolate bombs and hazelnut ice cream that the smarter people at the table had ordered. I gave my dessert the finger, and I think Alexandra saw me because she came over and pretended to scold me, “Okay, what’s the matter with your dessert?” I said, “Nothing, it’s just not that,” and pointed to Ali’s chocolate-palooza. “I would totally have this for breakfast, though!” Which I did the next day.
All in all, a good experience with Kellari, but I sure hope they can stay in business. Between the fancy freebies at the bar and the gargantuan portions, I worry about their bottom line. But it’s a nice place, the food is good, and the staff is pleasant. And the President lives right down the street, so if he ever gets a hankering for a shitload of Greek food, maybe you’ll see him there!
http://www.kellaridc.com 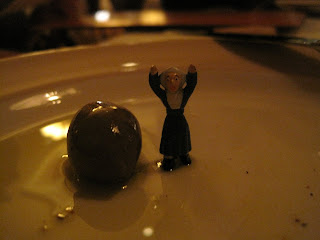 She'll be making appearances here on Nom3 as she accompanies me to various dining establishments and hootenannies. Here she is being menaced by a giant olive at Kellari Taverna. The terror!
Posted by Jen at 11:40 AM No comments: