Bryan Voltaggio is a Dirty Liar

A couple of weeks ago my friend Roland said to me, “It’s too bad you’re not going to be here the Saturday after Thanksgiving. I have the chef’s table in the kitchen at Volt.” To which I replied, “I’ll be back on Saturday!” And so began on of the most spectacular dining experiences of my life so far.

A little background: Volt is a restaurant in Frederick, MD, that is co-owned and chef-ed by one Bryan Voltaggio. Bryan (I call him Bryan) is also one of the final three contestants on this season of Top Chef, and he always does really innovative, interesting food on the show. It’s hotly debated who is going to win this season—all the finalists are great contenders. Volt has also received much high praise as one of the best restaurants in the DC area. So clearly this was not an opportunity I was going to pass up.

I got all duded up and arrived at Kim and Andy’s house at 7:45 or so, having been told that the limo (limo!) would be picking us up at 8:15. Greg and Sally were already there, so we hung out in the kitchen with some wine and cheeses, and Kim and I tried not to squee too much about the prospect of meeting Bryan. “What if he’s not there? Do you think he’ll be there? I bet he’ll be there. I bet he came home for the holiday. Oh my god, what if he’s there?” Finally, just before our voices reached teenage-girl pitch, I got a text from Roland saying he was two minutes away. We all got our coats, said goodbye to Amelie and Grandma, and went outside.

I had never been in a limo before—went to proms in Honda Civics or my date’s dad’s Caddy—so I didn’t know what to expect. Here’s the thing: limos are ridiculous! Blue starry lights on the ceiling, shag carpeting, bottom-lit bar along one side, big wrap-around seat—absolutely hilarious. Roland, being the wine guy and generous soul that he is, had brought along some very nice champagne. It was quite an experience, being driven through Maryland while drinking fancy wine, laughing with pals, and rocking out to Motley Crue. This is the way to travel, folks.

We finally arrived in Frederick, and after some joking about stopping at Sheetz for subs and chips, made our way down the main street of the very pretty Old Town area. The trees are all decorated with white lights, which just added to the special feeling of the evening. The restaurant is in a massive brick mansion, and while it’s quite grand on the outside, it’s very clean and modern inside. Roland checked in with the hostess, who took our coats and then guided us past the main dining room and the private party room to the small kitchen dining room in the back. I went in first.

You guys? Bryan. Was. Right. THERE.

He was talking to the people at the table next to ours. I looked at Kim. She looked at me. We may have both peed a little right then. “Oh my god oh my god oh my god,” went my brain, although I don’t think I said anything out loud. My face must have been betraying my thoughts, though, because Roland gave me a look that said, “All right, calm down.” You would have thought all of Duran Duran were there (except Andy Taylor, because he sucks).

Once we were seated, a tiny little boy wearing his father’s suit came over to explain the menu and take our cocktail orders. (He was actually the junior sommelier, and I shouldn’t make fun, but seriously, he was very wee. And 23. How does one become a sommelier when one has only been legal to drink for two years?) We asked him for recommendations, and he told us which were his favorites. (The Presbyterian and the Pomegranate Fizz, in case you’re curious.) We had decided not to go with the wine pairings with dinner, but rather to order off the wine list. This is what you do when you’re out with Roland.

Okay, so the main event. The kitchen menu is six courses, plus an amuse bouche and yummy breads. Here’s what we had: 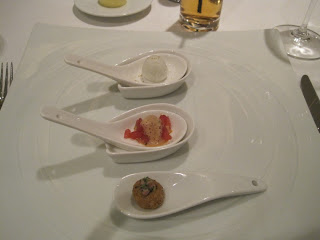 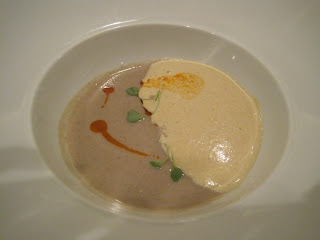 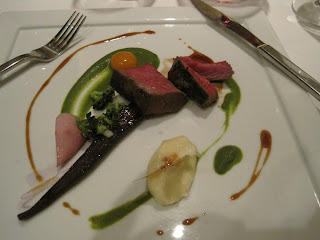 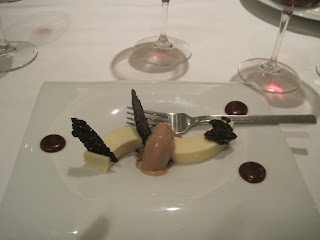 Everything was absolutely exquisite. If I had to find fault with anything, I’d say that the ravioli was slightly more al dente than I like, and the monkfish was just ever so slightly overcooked and a little tough. But the shiitake veloute was UNBELIEVABLE, the sage brown butter sauce was the stuff of dreams, and the beef was probably the most perfectly cooked piece of meat I’ve ever had. Just stunning, stunning food.

And the service! The waiters are all very young, but whoever’s the boss of them has those kids trained. Everyone’s dishes arrived at the same time, and the team of waiters, acting on some invisible signal (I know, because I was watching), put the dishes down in front of us at the exact same time. Gorgeous to watch. Oh, and they all wear eggplant-colored Chuck Taylors, because that’s what Bryan wears.

After we finished dessert, I begged Kim, who had been making friends with our various waiters all night, to ask one them if Bryan was still there (he was nowhere to be seen just then). She said, “You ask! I’m not asking!” So I took a last swig of wine and screwed up my courage.

“Is the chef still here? Do you think he could come out and say hello to the birthday boy?” (Read: “take a picture with me?”) I was assured that yes, he was still there, and the waiter would go see if he was free. 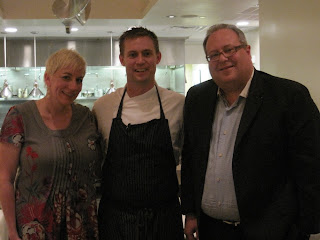 When he came out I almost fainted, but managed not to make too much of a fool of myself. We chatted with him a little bit about the food, Kim asking him about the sabayon and why chili oil and not siracha and things like that. He was incredibly gracious and professional, and just an all-around nice guy. I asked if I could take a picture of Roland and him, and even though he must be getting sick of people taking his photo, he said, “Sure, of course!” He and Roland were posed together and I was about to take the photo, when Kim said, “Jenny, you get in there too!” Not being one to disobey orders, I took up position on the other side of Bryan. And I put my damn arm around his waist! Holy crap, what was I thinking?! He didn’t seem to mind, though, although all I could think was, “I’m touching Bryan Voltaggio. I’m touching Bryan Voltaggio.” He’s a pretty slim dude, too, in case you were wondering.

So after all that, TJ (the tiny wine guy) came by to see if we wanted any after-dinner drinks or coffee. We didn’t, but one of the guys said something about wishing he had a cigar. Says TJ, “Let me get you our cigar menu.” What does this restaurant NOT have? So the boys ordered cigars and we all repaired to the patio so they could enjoy them. TJ accompanied us out there to cut and light the cigars, and in the meantime told us about his aspirations to own his own restaurant one day. He was just a delight to talk to. He brought us chairs and got our coats for us. He brought the bill out to us with a plate of teeny tiny “ice cream sandwich” profiterols, and didn’t rush us to pay, even though we were one of the last groups in the place. And after we’d paid the bill and the guys were finishing their cigars, out TJ comes one more time.

“Here are some pumpkin cranberry muffins for you all to take home.”

I mean, come on. Just a lovely touch. That right there is how you get a repeat customer.

It was a perfect evening. Good friends, good wine, a little celebrity sighting, and exquisite food. Thanks, Roland, for letting me be a part of it!

Oh, and the dirty liar part? While we were talking to the chef, Roland said, “Well, we hope you win Top Chef,” and Bryan replied, “I hope I win, too!” At which Kim or Andy or someone said, “You don’t know who won yet?” He said, “No, I don’t even know!” Which is when I sassed back, “You’re a dirty liar, you do too know!” Bryan laughed and said, “You’re right, I do know.”

I made Bryan Voltaggio laugh.