In the Kitchen with Dad

My dad was many things—a scientist, a Navy man, a husband, a shy Midwest guy, a lover of puns—but no one would really call him a chef. He traveled a lot with the Navy when we were kids, so Mom did most of the cooking. But once in a while, usually on a Saturday, maybe a rainy one, Dad would pull out his big binder of recipes and take over the kitchen. Sometimes his experiments went well—“experiments” because he was a scientist, after all—and some didn’t go quite as planned. But I loved being in the kitchen with him, even if it was just to watch. 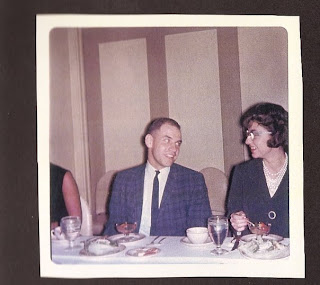 I first thing I remember Dad making was beef stroganoff, which I didn’t like as a kid because of the mushrooms and the noodles, but I love it today. We only had that a few times, all special occasions, as I recall. He made pita bread (which we called “Arab bread”—hey, it was the 70s. Political correctness hadn’t been invented yet.), which always came out hard and crispy, instead of soft and pliable, no matter what he did. But it was still delicious with butter and honey. I can still see the little white rounds on squares of tin foil all over the kitchen counters. He could rock a pan of shit-on-a-shingle (creamed chipped beef on toast, for those of you not in the Navy). His experiment with bagels was an interesting one—I think the fact that the dough had to be boiled first really fascinated Dad and made him want to try it. They came out a little too doughy, but the kitchen smelled like a dream. His flank steak marinade is still my favorite, and he could slice that meat so thin that it was never, ever tough. He made soft pretzels once, and I had the hardest time trying to figure out how to make the knot shape when I was “helping” him.

But it was Christmas when Dad really shone in the kitchen. When we were younger, my grandmother would send us tins of her Christmas cookies—honey cookies, anise cookies, spritz, Brazil-nut bars, and a German molasses-based cookie called lebkuchen (or something like that). But as she (and we) got older, it probably became too much work, so Dad started baking our Christmas cookies. He was usually solo in the kitchen, and we would wander in and out to see where he was in the process. For a couple of weeks there was a bowl of some kind of dough in the refrigerator. We would sometimes help him out with rolling the dough or cutting out shapes. But the bulk of our job was to decorate the cookies when they were done. We did it as a family either on a Saturday or after dinner some night. We would all sit around the table, which was covered in brown paper, with bowls of green, pink, and white icing, green and red sugar, red hots, and those little silver balls. We kids tried to be as detailed, creative, and meticulous as possible, while Mom and Dad kept it pretty simple. But I know they had a great time watching what we came up with, and didn’t care that we licked our fingers as we went.

Ten years ago, we lost Dad very suddenly. Christmas that year was really hard, but my sisters still made honey cookies and lebkuchen. We still decorated the honey cookies around the kitchen table, and it was a wonderful time, but there was an empty chair, a lack of puns, and a hole in our lives that no amount of cookies could ever fill.

If your dad is still around, give him a hug or a call. Then go make some cookies.

Bring honey and molasses to boil. Stir in egg, lemon juice, and rind, and add dry ingredients. Chill dough overnight. Roll to 1/4 inch think on lightly floured board; cut into squares. Bake 10-12 min at 400 degrees.
Makes 6 dozen. Store these cookies in a tightly covered tin. They lose their moisture pretty quickly, but that just means they’re extra good to dunk in tea.

Dissolve ammonium carbonate in milk; let sit overnight. Combine all ingredients. Refrigerate dough overnight. Roll dough to about 3/8 inch thick, and cut into shapes. Bake at 350 degrees until firm – about 8 minutes. (These cookies should not brown.)

For the honey and anise cookies, make icing with powdered sugar and milk and add food coloring. (Icing shouldn’t be too thick—should drop off a spoon.) Get your family together, find some kids, and ice cookies and decorate with colored sugar, red hots, nonpareils, or whatever you think is festive.
Posted by Jen at 2:48 PM 1 comment: