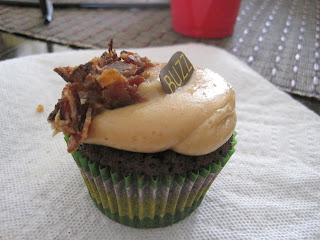 I'm not usually a huge fan of the cupcake -- can take 'em or leave 'em -- but holy shitballs, this is amazing. It's a dark chocolate cupcake with some kind of peanut butter-caramely goo inside, topped with a thick peanut butter frosting.

When I die, I want to go to there.

Cupcake courtesy of Buzz Bakery in Alexandria.
Posted by Jen at 12:36 PM 2 comments:

There's a rumor going around that Season 7 of Top Chef will be filming in DC! Can I get a "SQUEEEEE!" Eater National says:

The folks at Bravo have yet to make it official, but the Washington Post's gossip column reports that the new season of of Top Chef will be filming in Washington D.C. The city seems like a perfect pick — not only does it have a massive Whole Foods, but there are also a lot of former cheftestants who live in the area, and of course, there's the whole Obama factor.

This is awesome for a number of reasons, not least because it will finally give DC the notoriety it deserves as a serious food town.

I recently returned from my first “for fun” trip to Las Vegas. I’d been to Sin City twice before for work, but never just to kick around, and not for over 10 years. Turns out Vegas can be a pretty fun place if you don’t mind parting with your hard earned. Also turns out that you can find some damn good eating there!

Actually, that shouldn’t come as a surprise, since the last season of Top Chef was filmed there. But the last time I was in LV we ate at a lot of meh restaurants and those weird café/diner-ish places where you can get breakfast anytime (“I’ll have the pancakes in the Age of Enlightenment”) and play Keno while you wait. I’m sure those places still exist, but we, happily, did not have to encounter them.

My merry gang stayed in New York New York, which is one of the more reasonably sized hotels in Vegas. (I actually could find my elevator!) The part of the casino that is not covered in slots and tables is set up like a city sidewalk, which is a cute way to do it. There was a sort of food-courty “neighborhood” where you could get a wiener or a slice or a coffee, and there were also some bigger, nicer restaurants (Il Fornaio and Gallaher’s) and an Irish bar called Nine Fine Irishmen (none of whom I found, sadly). Ali and I were happy to discover that Il Fornaio’s café had great coffee and pastries in the morning—no buffets for us!

New York New York is also directly across the Strip from the MGM Grand, which, along with Mandalay Bay, houses a good number of the city’s finer restaurants—places founded by some of the world’s best-known chefs. It was here that we ended up on our first night, and after passing Joel Roubouchon’s L’Atelier and Michael Mena’s Nob Hill Tavern, we settled on Wolfgang Puck’s Bar and Grill. We all wanted a good meal, but nothing too fancy, and this fit the bill nicely. After getting some initial attitude from the hostess, (whatever, cow, do you want our money or not?), we sat down for a perfectly nice meal. My chopped roasted vegetable salad was pretty good, if a little mushy (EGGPLANT, bleh). Heather’s ricotta gnocci were somehow light and dense at the same time, and my meat-covered wood grilled pizza was a whole lotta comfort. Patti’s mussels were delicious and vast, and Ali and Alex both seemed to enjoy their salmon. Was our meal off the chain? No, but everything was very enjoyable and our waitress was the bomb.

Oh, but the homemade truffled potato chips with Maytag blue cheese almost made me start crying.

The next day, Ali, Heather, and I decided to take a walk down to the Bellagio to see the Chihuly ceiling, and managed to work up a bit of an appetite going halfway up the Strip and back. So we decided to see what the Nine Fine Irishmen had to offer. We didn’t want anything too much, since we were going to dinner in the Venetian that night and then to see Blue Man Group. How about some nice light fried sausages and fried taters and beer cheese dip? Ah, who cares. Vegas is a city of excess anyway, right?

After that little snack (and several beers) we did a little gambling (read: losing, if you’re me), then got changed and headed over to the Venetian. Patti had an Italian restaurant in mind that she wanted us to check out, so we followed her to Canaletto, so named (presumably) because it’s on the “canal” that runs through the joint. I started with a simple salad of greens and carrots and then moved on to the saffron risotto with asparagus and chicken. It was pretty nommilicous. Patti scored, though, with a veal osso bucco OF THE GODS. 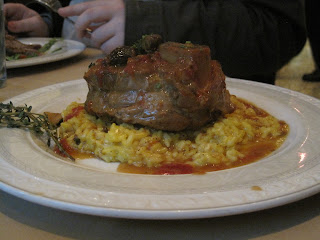 I was feeling a little iffy in the tummy area the next day, so I wasn’t all that into the idea of going to the raw bar at Harrah’s with Patti and Alex for lunch. That changed after some losing and free cocktails, so off we went in our cab, which was driven by Carlos Santana (who does a fine Tom Jones impression, I’ll have you know). And so began my day of eating things I normally don’t.

We wound our way through the down-at-heel-ish casino and eventually found three empty seats at the Oyster Bar at Penazzi. Now, I do not normally enjoy the raw oyster, but regular readers will remember my self-dares, so I decided to go for it. And you know what? They were really good! Don’t ask me what kind they were—all I know is that they were a good, Goldilocks size and they were pleasantly briny and not at all gritty. Yay me! Patti also ordered us some Oysters Rockefeller, which were an interesting surprise. Cooked oysters with spinach and cream and cheese? Huh. Liked ‘em, though. Enormous tempura prawns, a spicy tuna roll, and a hearty bouillabaisse rounded out our shared seafood-stravaganza. For the moment.

After some more bar time and gambling back at NYNY, and after Patti won the friggin’ JACKPOT at Keno, Patti, Alex, Mike, and I headed off to this out-of-the-way sushi place that Patti raved about. Now, I myself am not a fan of the sushi, having been overexposed to it the first time out (urchin, Fred? Really?), but Heather was going to a show and Ali took herself out for a big steak, so I decided to tag along. I don’t really know anything about ordering sushi, so I just winged it and let the rest of the gang do the honors.

This was some damn good sushi, y’all. The rolls were pretty ginormous, but everything was fresh and flavorful and very satisfying, which is saying something for a fish place in a strip mall in the middle of a desert. I’m still not excited about the giant pieces of raw fish (is that sashimi or the other thing?)—seems too much like eating a tongue (and not in a good way)—but I am all about some of those rolls now! Sister Terrifyah, not so much. 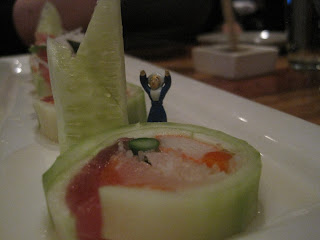 So that was Vegas. It’s a weird, weird place, but you can eat really, really well there.

Oh, and for our last dinner there, Heather, Ali, and I went to craftsteak, Tom Colicchio’s joint. Stay tuned.
Posted by Jen at 2:13 PM 1 comment: